I am here on WhatsApp to answer you, you can ask me anything!
Hi, how can I help you?
WhatsApp

Paragliding in Brescia means flying in a place where thousands of pilots have taken off.

The flying community is particularly close-knit because, in addition to being made up of brai scèt (good guys), Brescia has an excellent flight site that is uncommon for convenience and flight possibilities.

First of all, some premise: paragliding, whether in Brescia, Bergamo, Garda lake  or in other places of Lombardy, requires only the will to do so, otherwise the physical effort required is limited.

Flying in a tandem paraglider is the best way to enjoy the adventure of flight without any particular commitment. Flying free and light like a bird is more within reach than you might think.

To fly in a tandem paraglider you only need to be able to run for 10 meters , just enough to take off: when booking you are asked to communicate if you weigh more than 90 Kg; in this case the pilot will evaluate whether it is possible to fly or not according to the wind conditions of the day.

The tandem paraglider flight in Brescia begin with the meeting at the landing, which is located in via J.Gussago, S. Polo district area. From here, we’ll go up to the take-off which is located on Monte Maddalena, a 20 minutes drive.

With paragliding and in particular with the tandem paraglider it is important to take off with the wind coming from the front. This is because what matters to take off is the speed of the paraglider with respect to the air: this is equal to the speed of the pilot (or of the pilot-passenger couple in the case of tandem flight) only in the case of zero wind. If, on the other hand, there is wind coming from the front, the speed at which we have to run to take off will be lower, as already some speed is given by the wind, which will help the glider to inflate, rise above our heads and then generate the lift necessary to detach ourselves from the ground.

The passenger, attached in front of the pilot and both to the glider, will then have to run down a meadow together with the pilot for the time necessary for the paraglider to pass these phases and lift us into the air: typically 10, 20 meters of running are required.

To fly in a tandem paraglider, the passenger must be dressed in a sporty way, taking into account that the flight speed is around 40 km/h and that therefore a windproof jacket is essential. Footwear is important and the ideal would be a pair of hiking boots or alternatively sneakers as a second choice.

Sunglasses are also important, to protect yourself from both light and wind: don’t worry they will not fall in flight because having the helmet they will remain firmly around the face.

Flying with paragliding in Brescia , whether it is single paragliding or two-seater paragliding, will not leave you indifferent. The city is nearby and in favorable wind conditions it is possible to fly over it. 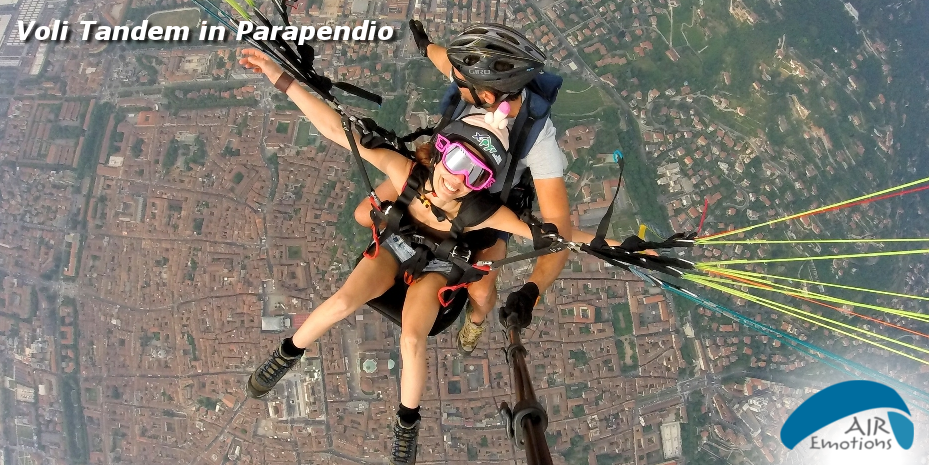